Most references will tell you that giallo movies followed the template of pulp crime novels and murder mysteries published by the Italian firm of Mondadori from the thirties through the fifties, which generally featured yellow borders around the cover artwork (giallo is the Italian word for ‘yellow’). Most were simply translations of British and American mysteries and thrillers – Ellery Queen, Agatha Christie, James Hadley Chase, Edgar Wallace, Erle Stanley Gardner, etc.

Digging deeper, you’ll discover that in the late fifties and sixties, German filmmakers started a wildly popular series of Edgar Wallace adaptations called krimi (short for Kriminalfilm) – Wallace was a prolific writer of British mysteries: The Green Archer, Fellowship of the Frog, The Four Just Men, The Ringer, The Strange Countess, The Squeaker, The Crimson Circle, as well as the original creator of King Kong – the man wrote over 175 novels, most from the 19-teens through the 1930s, though perhaps only a dozen are still in print today. Harald Reinl and Alfred Vohrer made many krimi for the Danish studio Rialto; Jürgen Roland, and Karl Anton are also notable krimi directors. 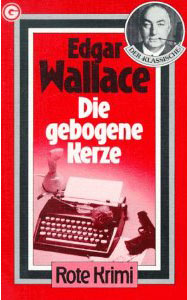 Wallace’s novels (as well as the other Mondadori titles) are very efficient little potboilers; they primarily feature a single villain, always mysterious and unknown, and the intrepid policeman or detective who finally reveals his (or her) identity, though not before the subsequent commission of a number of linked, lurid crimes. The krimi films, like Wallace’s novels, are noted today more for their quantity rather than their quality, but they were very popular at the time, and laid important foundations for the later work of a lot of other writers.

Also instrumental in the giallo array of influences were the films of Alfred Hitchcock. Just look at a partial list of his fifties films: Strangers on a Train (1951), Dial M For Murder (1954), Rear Window (1954), The Trouble with Harry (1955), The Wrong Man (1956), The Man Who Knew Too Much (1956), Vertigo (1958), not to mention the biggie in 1960, Psycho. The hallmarks here, of course, were the visual craftsmanship and the emphasis on the psychological aspects of the characters.

Another consideration, both in style and economics, was the success of England’s Hammer Studios, an enterprise that had been producing films since 1935, but didn’t distinguish itself as a production company until the late fifties, when they started producing singularly stylish and, to the standards of the time, fairly explicit horror movies. The Curse of Frankenstein (1957), Horror of Dracula (1958), and The Mummy (1959) were their first forays, starring Peter Cushing and Christopher Lee, and directed by Terence Fisher. While produced on small budgets (observant Hammer fans can list the sets and costumes used over and over again in subsequent sequels), Fisher’s flair for rich period imagery and colorful composition gave the films a slick, stylish veneer. Over the sixties and seventies, Fisher and others created six sequels to the Frankenstein films, eight other Draculas, and three other Mummys, as well as many other cult favorites like the Karnstein trilogy (The Vampire Lovers, Lust For A Vampire, and Twins Of Evil), Dr. Jekyll and Sister Hyde, and Captain Kronos Vampire Hunter.

The Hammer films, as well as other foreign horror films (usually dubbed into English), were successful here due to a change in the American film business. Up until 1948, American film studios owned the theaters their work was shown in. When this policy was overturned in the court case United States v. Paramount Pictures, Inc. for anti-trust, the studios could no longer monopolize distribution, and non-studio distributors opened the gates for non-American films. The rights were generally cheaper, and European films weren’t saddled with the Hays Production Code for provocative content. Anyone who grew up in the sixties will remember seeing dozens of these films at drive-ins and on late-night television. (We also, finally, got exposure to filmmakers like Ingmar Bergman, Vittorio DeSica, Akira Kurosawa and Federico Fellini as well.)

Mario Bava had been diligently working as a cinematographer since the early forties, following in the footsteps of his father, Eugenio, who had shot many of Italy’s most famous silent films. Among Mario’s many shooting credits were Gina Lollobrigida comedies and Steve Reeves strongman epics. His first credited films as a director were actually projects that he finished for other directors: Riccardo Freda’s I Vampiri in 1956 and Caltiki, the Immortal Monster in 1959, as well as 1959’s The Giant Of Marathon, another Steve Reeves vehicle originally directed by Jacques Tourneur. His first full feature film, as a director, was Italy’s first science fiction film, Le Morte Viene Dallo Spazio (The Day the Sky Exploded) (1958), but the directing credit went to Bava’s more experience studio supervisor, Paolo Heusch. In 1960, he finally got his own credit on his own film, La Maschera Del Demonio (Mask Of The Demon, best known in the USA and England as Black Sunday), an extraordinarily moody and stylish horror film which launched the career of the actress Barbara Steele. Filmed in black-and-white, it combined the straightforward storytelling and expressionistic film noir-ish photography and lighting of the German krimi movies with infusions of Hitchcock’s Freudian subtleties and Hammer’s sense of lush period hysteria. (And its opening scene, featuring Barbara Steele having a spiked mask hammered through her face, would have never passed muster in America before then.)

At this point, it bears mentioning that Mask Of The Demon (Black Sunday), while certainly one of Italy’s finest genre films, IS NOT considered a giallo film. Giallo connoisseurs tend to eschew ghost stories, monster movies, or anything that might smack of the supernatural. Giallo films are real-world psychological murder thrillers that are enhanced by film techniques, uniquely modern music soundtracks and fevered psychological extremity – which is why Bava’s fourth film (after two other sword-and sandal films, Hercules in the Haunted World and Erik the Conqueror), The Girl Who Knew Too Much (La Ragazza Che Sapeva Troppo) (Italy, 1962), is the film considered to be the first true giallo film.

The Girl Who Knew Too Much seems pretty tame these days, but it was groundbreaking for a number of reasons. It was originally conceived as an homage to Hitchcock; the title makes this pretty obvious, as well as the familiar Hitchcock conceit of an everyday innocent being plunged into harrowing circumstances they seem unequipped to resolve themselves. The film also endeavors to add comedic elements within the dark main story (John Saxon takes an absurd amount of physical damage in the course of wooing Nora), and contains some Freudian undercurrents that enhance the characters without distracting from the main plot. (Leticia Roman’s Nora is straight out of the sexually-repressed ice-queen mold that started with Grace Kelly, was elaborated upon with Kim Novak, and became explicit with Tippi Hedren. Many argue (rightly so, I believe) that Janet Leigh’s Marion Crane, in Psycho, is killed by Norman’s ‘mother’ as punishment for her earthy, forthright sexuality, a staple motif in many gialli that American filmmakers like John Carpenter and Sean Cunningham emulated in the seventies and eighties.) But Bava’s variations on the Hitchcock template put the visual elements front-and-center, regardless of the diluting effect it has on the central mystery. His nighttime location shooting on the Piazza de Spagna (the Spanish Steps) is almost German Expressionist in its stark lighting, atmospheric scale and abstracting camera angles, and the lush apartment that Nora stays in for most of the film is an art director’s dream, used to thrillingly macabre effect by Bava and his legendary cameraman Ubaldo Terzano. 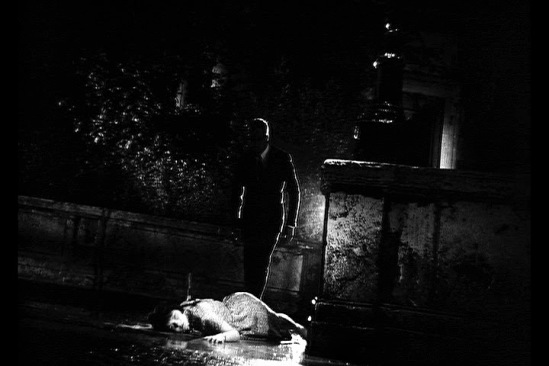 The plot: young and pretty Nora Davis (Leticia Roman) is flying in to Rome to visit her sick Aunt Ethel. While flying in, reading one of the mystery novels she loves to devour, she meets a charming man who shares cigarettes with her; upon her arrival at the airport, we learn he’s smuggling drugs into Rome through those same cigarettes, and he’s arrested. Feeling like she’s weathered a close call, she proceeds to Ethel’s apartment. Attending to Ethel is the handsome Dr. Marcello Bassi (John Saxon), who fears that she’s in pretty dire straits despite her ebullient manner. When Ethel indeed succumbs that night, Nora can’t reach the doctor, and strikes out on her own into the dark Roman night to fetch him from the hospital. At the Spanish Steps, she’s molested by a purse-snatcher and loses consciousness. Upon reviving, she witness a murder – a dying woman who has been stabbed in the back lurches towards her for help, but a man appears behind her as she dies, extracts the knife, and drags her body away. Nora passes out once again; a male passerby tries to revive her with a little whiskey, but to no avail. She’s eventually discovered by a policeman, who thinks she’s drunk, and she’s taken to the hospital. Dr. Bassi gets her out, despite the suspicions of the doctors and the police, but her tale of the murder is pretty far-fetched – it may be a trauma-induced dream caused by the purse-snatcher’s attack, it may be a hallucination caused by those drug-laced cigarettes, or it may be just an overactive imagination fueled by her addiction to lurid mystery novels.

At Ethel’s funeral, Nora and Dr. Bassi meet Laura Craven-Torrani (Valentina Cortese), a wealthy doctor’s wife who befriends them and insists that Nora stay at her place instead of Ethel’s small, now sadder, apartment. Laura Craven’s sister, we discover, was murdered ten years ago, directly in front of their apartment on the Spanish Steps, in exactly the fashion that Nora believes she witnessed just a few nights ago. But the perpetrator, the Alphabet Killer, was caught and sentenced to jail. He had killed A, B, and C (Laura’s sister, Emily Craven) before being apprehended. Has the Alphabet Murder returned, or are those murders being copycatted? And is Nora Davis the ‘D’ on the Alphabet Killer’s list? If so, who was the woman Nora saw being murdered a few nights ago? Nora, of course, must find the truth, and survey a series of spooky interiors, looming and foreboding Roman passageways, stark lightbulb-lit white hallways and shady characters in pursuit of the serial killer. The true killer, of course, emerges from among the characters we’re already familiar with, one of the last people we’d suspect.

As shopworn as that formula had become, it’s the novel execution by Bava that distinguishes the film. You could write a film-school dissertation on just the myriad ways he lights Leticia Roman’s face, let alone all of the other eerily beautiful compositional delights that Bava employs in telling his story and scaring hell out of us. Despite its dated conceits, which aren’t nearly as effective today as they were back then, it’s still a pretty involving film, and the final twist is genuinely surprising.

The Girl Who Knew Too Much laid the groundwork for the many giallo films that followed. This film can be seen as the introduction of sorts. His subsequent film, Blood And Black Lace (Sei Donne Per L’Assassino) (1964), became the textbook, and is one of the most stylish, lurid and clever mystery-horror films ever shot.